We are The Stones family, I’m Chloe, I’m married to Adam, and we have two fabulous children Elsie, 3 , and Seb, 2. Elsie was diagnosed post-natally with Down syndrome which came as a huge shock to our family. 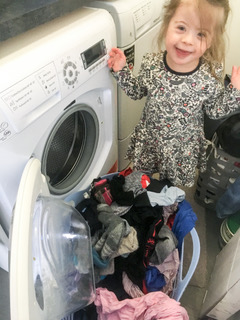 Elsie was a much wanted baby, the previous couple of years had been a very difficult time after losing my dad and brother and having to go through IVF, we were over the moon when we found out we were expecting a baby. Things were looking up at last! My pregnancy was just like anyone else’s. The same tiredness, sickness, cravings of mayonnaise and onion rings, and not being able to get comfy however many pillows I surrounded myself with. My scans were all very positive and with a chance of 1 in 5500 women of having a baby with any ‘abnormalities’ as they called it no-one batted an eyelid. When Elsie arrived two weeks early and it was explained that it was more than likely Elsie had Down syndrome I’m not going to lie I was heartbroken, after all that we had been through life just didn’t seem fair. With no knowledge of Down syndrome I was petrified of the unknown. I didn’t feel I was a strong enough person to be able to bring up a child with disabilities, but holding Elsie in my arms and seeing her tiny features and expressions I just knew Adam and I were going to get through this. The love and protectiveness I felt for her was overwhelming, we were going to give her the best chance in life we could. We spent the next week following Elsie’s arrival in hospital, which consisted of scans, tests and meeting various consultants. To be honest it was one of the most scary weeks I’ve ever had, watching my tiny baby being prodded and poked around by all different doctors and nurses not knowing what they might find filled me with anxiety. Elsie was proving everybody wrong, nearly everything in her tiny body was working as it should, the only thing that was detected was a medium size hole in her heart which the consultant reassured us would more than likely close up by itself without surgery, they were to keep an eye on it and hopefully it will repair itself.

Elsie was very fortunate to only have to spend a week in hospital before she was discharged. It gave us as parents a chance to really bond with Elsie and get an understanding of Down syndrome. It was a very emotional time not only getting my head around the diagnosis but also a lot of grief resurfaced. The one thing my dad always wanted was to be a Granddad and I found this very hard that he wasn’t here to meet his Granddaughter. One of the things I found the most difficult was telling our family and friends about Elsie’s diagnosis and seeing them for the first time. Not because we were ashamed – I think it was more the fear of other people’s reactions through lack of knowledge, the “oh I’m so sorry” or “you poor things”. If I got a pound for the amount of people that have said that to me I would be millionaire! Adam was so much stronger than me with this and told our closest family straight away. He was my rock. Some people we chose to tell when they met Elsie. We didn’t want them to judge her and make an old fashioned presumption. By being introduced to our baby as Elsie and holding her first before they knew her diagnosis we found people could see for themselves she was no different to any other baby. We didn’t get much information from the hospital with regards to Down syndrome apart being given a basic leaflet and contact details for the DSA. We were guided by the community team most of the time and finding out information for ourselves. Elsie’s paediatrician was great too and was the first to recommend PSDS to us. At this point I didn’t feel ready to join any support groups. I had some friends with babies all born within months of Elsie so we spent a lot of time with them going for walks, attending baby classes and having lots of coffee. It was really important for me to do things that any other parent would do with their child when we weren’t attending appointments.

In the back of my mind was the last thing the paediatrician had said before we got discharged from hospital: ‘Mix Elsie with anyone and everyone and she will learn and benefit from them greatly’. This has stuck with me and I have made sure as Elsie has grown up she has had opportunities like any other child and been included. Elsie has gone to a mainstream nursery and will go to a mainstream school. Since her little brother Seb arrived, Elsie has just thrived. The bond between them is so incredible and they are the best of friends. They learn from each other and have achieved milestones at the same time. There is 14 months between them and they are often mistaken for twins. Seb’s caring nature makes sure Elsie is always included whether it’s playing a game or giving her a biscuit. Don’t get me wrong it’s not always so peaceful – like any siblings a little scuffle can break out if one’s got a toy the other one wants! Seb is at that age where he is like a sponge, he learns and picks things up very quickly however Elsie will take her time and when she’s ready will achieve the same. Elsie watches Seb constantly and soon after will be doing the same as him. I often say Seb will take the most direct route to get there and Elsie, well, she likes to take the scenic route and enjoy the views! 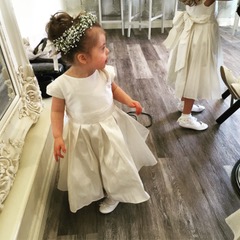 About 18 months ago, we went to our first PSDS coffee morning and joined the Charity. It felt like it was the right time for us. If I’m honest, now that we are members and have experienced what PSDS has to offer I wish we had joined a lot earlier. The families we have met and the support we have had through PSDS is just amazing and I can’t thank them enough. Elsie is currently attending DIGBIES, everyone is just like us as a family and it makes me happy to see Elsie learning new skills and making friends for life. I joined the PSDS Events Sub-committee late last year and now Chair the meetings which I’m really excited about. I work for a Charity too and so I felt I would be able to put my experience in fundraising and organising events to good use. I will be hosting my very own ‘Rock Your Socks’ coffee morning at a local cafe on World Down Syndrome Day as I feel very passionate about raising awareness and fundraising for PSDS. Hopefully it will be the first of many events! I know with the support of PSDS Elsie has a budding future ahead of her.

Elsie will be four in May and is growing up so fast. Her hole in the heart amazingly repaired itself and so she has been discharged from the cardiologist. Elsie is becoming a very sassy little girl. She’s independent, and likes to learn how to do things for herself. Her favourite activities are helping me at home with the washing, cleaning and tidying up, she especially likes to clear away the toys and equipment at DIGBIES. Elsie adores looking at books and I will find her telling stories to herself in a quiet corner. Elsie is extremely creative and is always drawing, not always on paper may I add, I will often find little pieces of artwork on walls around the house!

When I look back now at the start of our adventure with Elsie I wish I hadn’t been so scared and worried. Of course we have faced many challenges and I’m sure there’s more to come, but the fun happy times certainly outweigh the difficult times. I can honestly say having Elsie has made me into a better person, she’s taught me to appreciate the little things, to be strong, and to make the most of every opportunity. She amazes me every day with the things she achieves, she makes me laugh, and most of all she loves life. I can’t wait to see what the future has in store for her. 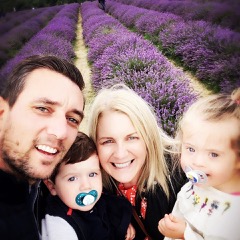